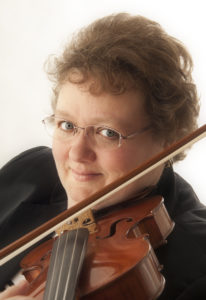 SAA Registered Teacher Trainer in Suzuki Early Childhood Education,
Violin, Viola, Chamber Music, Theory, and Suzuki Early Childhood Education Teacher,
Dolce Strings Touring Ensemble Co-director
Danette Warren Schuh is the Director of Dolce Music Studio, home of Dolce Strings and Dolce Babies, where she teaches violin, viola and Suzuki Early Childhood classes. She also co-directs the Dolce Strings Touring Ensemble. She is one of only two SAA Registered Suzuki Early Childhood Education Teacher Trainers in the United States. As one of the teachers who taught SECE classes at the 16th World Convention in Japan, she also had the privilege of speaking and presenting the SECE curriculum in depth. A sought-after clinician at institutes, workshops, festivals and schools, she has been teaching for over 40 years, and has held positions such as President of the Houston Area Suzuki Strings Association (now Southeast Texas Suzuki Association), and state board member of Texas Music Teachers Association. She has received the Houston Music Teachers Association President’s “Bravo” award and was also awarded “Teacher of the Year”. She has been published in the American Suzuki Journal, contributed a video to Parents and Partners Online, and has presented at numerous SAA Conferences and Leadership Retreats. She is currently the SECE Coordinator for the 2018 SAA Conference. She holds a Bachelor of Music degree with honors from Indiana University, where she studied violin with Tadeusz Wronski and Josef Gingold. She has had the great privilege of studying SECE with the creators of the curriculum, Dorothy Jones and Sharon Jones. She also performs with the Möbius Chamber Ensemble and as a freelance violinist and violist in the greater Houston area.
SAA Registered Training